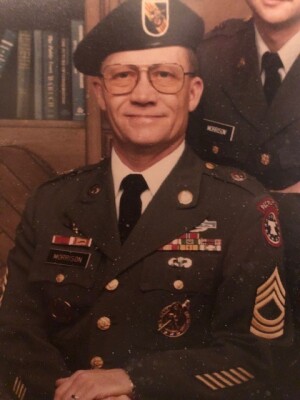 Master Sargent Clyde Irwin Morrison, Jr., “Sarge” was born on 10 June 1938 to Clyde I. Morrison, Sr. and Verna Marie Morrison in Middletown, OH. Clyde is preceded in death by both of his parents; brothers Carl, Everett, Rodney, Mark, Gary, Phillip, Charles Fox, Joshua Finch, Homer Finch, and Harry Finch; sisters Dorothy Stacy, Barbara Jean Winkler, Joyce Finch, Carole Finch, Bea Finch, and Gay; nephews Donald Morrison, Jr., Scott Cole, Kevin Finch, Dean Finch, Dana Finch, and David Cole; nieces Jackie Stacy; and his lifelong friend, Lt. Col. Bennett (Maxine) Wood. Clyde is survived by his wife, Anna Morrison (Finch); son Lynn (Monica) Morrison; daughter Tammy (Derrick) Morrison; grandsons Kevin Morrison (Baby), Matt (Emilie) Morrison, Jason (Amber) Morrison, Angel Church, and five great grandchildren.  He is also survived by his brothers Joe (Linda), Richard (Debbie) Donald; sisters Janice Fox, Francis Cole, and Phyllis as well as many cousins, nieces, and nephews.  Clyde served for 43 years in the United States Army.  During his many years in service Clyde served proudly in the 11th Airborne, 82nd Airborne, 101st Airborne, 5th Special Forces, a Drill Sargent, and a Recruiter.  During his military career, Clyde served in two tours in Vietnam, and received the Bronze Star with Valor for his heroic efforts.  As a recruiter, Clyde was the first recruiter to be allowed into Middletown High School.  After his career in the Army, Clyde went on to work at the Post Office in Middletown as a mail carrier for 15 years.  Clyde will be remembered as a husband, father, brother, grandfather and above all, a solider- a man of honor and integrity.  He will be greatly missed and loved for years to come.  A graveside memorial service will be held at David's Cemetery, Kettering, Ohio on Saturday, January 16, 2021 at 10:30am.  Online condolences may be left for the family at www.bakerstevensparramore.com

To send flowers to the family or plant a tree in memory of Clyde Morrison "Sarge", please visit our floral store.